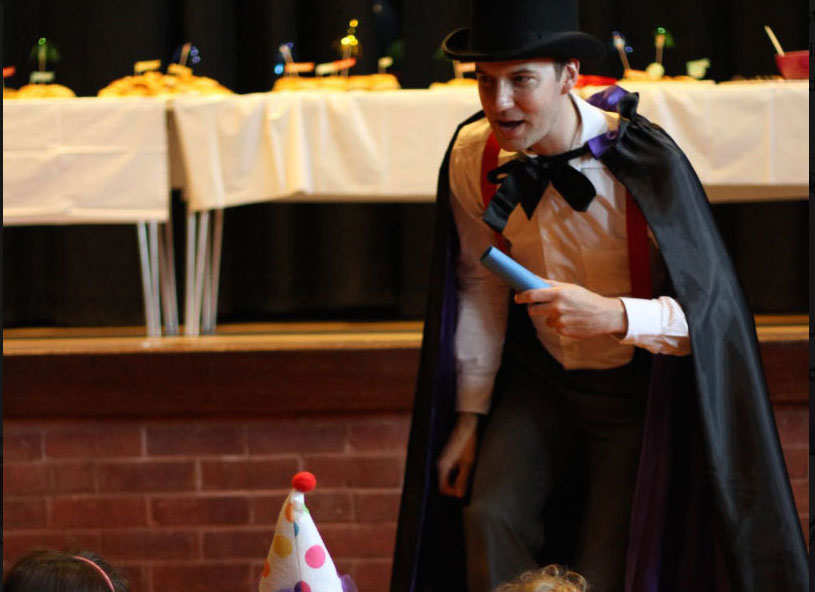 "We were amazed at how you managed to calm down so many hyped-up little boys and hold their attention for the entire show. It was lovely to see their genuine amazement and excitement. We really appreciated that the magic came with a story to tell and music as well. Ben has listened to the audio CD twice through since you came - he really loved it. So thank you very much for your professionalism."
‍
- N. Simms comments on this Angel children's magician show for a six year old boy's party

"I've worked in a school for 25 years and so have seen more than my share of entertainers. I've never seen children as transfixed as they were with this show. You didn't lose them for a minute!"
‍
- Mr. P. Pannell saw this magician show in Clapham for 5 year old boys and girls

"Parents are referring to you as 'the magic child whisperer! :-))'"
‍
- Mrs. C. Mankowitz booked this children's magic show in Hampstead for this 5 year old's party

"We thought that the show was wonderful. I have never seen so many small children sitting so absorbed in such a great magic and storytelling act, only minutes after coming off a bouncy castle. … Tom still talks about you by name and the tricks that he helped you perform."
‍
- Mrs. J. Simpson Day, mother who invited this Kensington children's magician for her 4-year-old's party

"This charming performance held the attention of children and adults alike. Part magic, part adventure, this imaginative tale takes you to an island where anything can happen.'"
‍
- N. Cary, Museum of Childhood, V&A (Bethnal Green)

"Not only did we adore your show, but we loved the CD. It's really brilliant... somehow the music was rather mesmerizing as well as the great story, and it's so original and fun. ... So many congrats on that. (Is it properly on sale yet? I'll certainly recommend it if so). The birthday party was wonderful, you did such a good job getting that rather crazed crowd under control and I loved watching them all sitting as tall and straight as possible hoping to be picked! It was just what we wanted, stylish and fun and it was a pleasure having you."
‍
- N. Stacey, London mother who invited this London children's entertainer in Islington, She also comments on the album he has created, based on the live show

"Christopher has a natural and relaxed manner with children…He knew exactly how to capture and how to sustain their interest…. They loved every minute of it."
‍
- Mrs. S. Puzey, Headmistress, Thomas's School, Pimlico, London (Children's school magic show for age 4)

"Thank you so much for that wonderful show, my daughter very much enjoyed it (and she had already seen it!!) as did her friends, many commented about how much fun they had had!! … I very much appreciated the professional approach and also the fantastic creative side of it (the adults present were very impressed too)."
‍
- M. Bergstrom, Mother for a Notting Hill children's magician show for Children aged 6

"We were impressed and amazed at how you managed to captivate the kids for the whole show, brilliant! I had many comments from other parents about how good they thought you were with the kids, very gentle and calm, and how much they enjoyed the show. You helped make the party very successful with lots of happy kids and parents."
‍
- Mrs. R. Attfield, mother who organised this London children's magician for her 5-year-old's party in Old Street.

"It was a …spectacular show. The children were engrossed from beginning to end and participated eagerly throughout."
‍
- Miss K. Reese, Teacher, Fleet Primary School, Hampstead, London (children's magician show for ages 4-7)

"I was particularly impressed that although the afternoon was very lively and interactive it was also well controlled and organised. The children had great fun and were very keen to tell me how much they enjoyed themselves."
‍
- Mrs. E. Birkett-Evans, School Manager, Thomas's School, Kensington, London (children's magic show in Kensington for ages 4-6)

"Christopher captured the children's imaginations, taking them on an exciting journey into the realms of magic. He has a wonderful manner with the children, involving them in his activities to the extent that they were hanging onto his every word and action! We highly recommend Christopher's magic shows."
‍
- Mrs. D. Davies, Wetherby School, Notting Hill Gate, London (wanted a children's storyteller in London for ages 4-7)